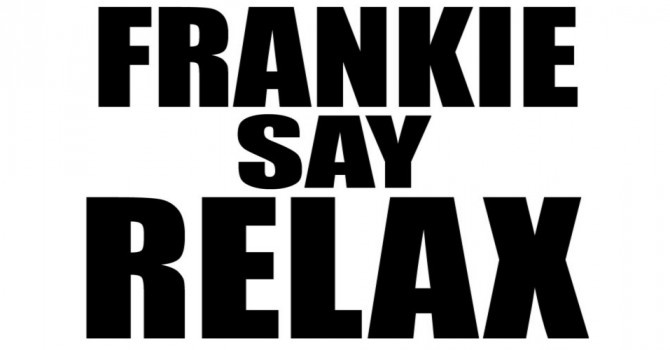 In 1983, pop band “Frankie Goes To Hollywood” released one of the most controversial songs of the last 50 years, “Relax”. This first release saw it chart just outside of the top 50 before dropping out of the charts.  It was released again in 1984, when a combination of luck and design helped to catapult the band to international stardom. To coincide with the second release, ZTT‘s Paul Morley designed a series of “FRANKIE SAY…” T-shirts to promote the record label’s chart act Frankie Goes to Hollywood (FGTH).   The official FGTH designs were particularly successful, and spawned many imitations of their own.

Radio 1 DJ, Mike Read, whilst playing the record on his chart show happened to look at the sleeve of Relax, and was shocked by the sexual content. Immediately declaring the song “overtly obscene”, he tossed the record across the studio in disgust. On 10th January 1984, “Relax” was given a full BBC ban. This instantly drove the track to the number one position, creating a mountain of press and a veritable storm of outrage across the land.“Relax” was at number one for several weeks, creating a massive buzz and huge demand for more product.

Everybody wanted to hear the song because it was banned, as the curiosity gripped everybody.  “Top of the Pops” on a Thursday evening was the definitive TV music show, as pop videos became key to marketing a band’s brand.  However, the hype initiated by Mike Reid’s comments and actions only served to propel the single to number 1.  For seven weeks the BBC could not broadcast the video of the nation’s favourite pop song as they had banned all formats of it.

The public and media obsession with this “banned” song was cleverly complimented with the offline media campaign through the printed T-shirts.  In effect, FGTH had the public walking around in the summer acting as walking advertising boards!  If that was not clever enough, it was the public that were paying to advertise as they paid for the privilege of wearing a T-shirt. Even I bought one!

The lessons learnt in this campaign approach have been very much adopted in exemplar digital marketing strategies today. It can be argued that FGTH sought to attract negative publicity.  This is a dangerous strategy which would not be appropriate for many brands. However creating a buzz and being part of, or the topic of, “conversation is the pot of gold that we are all chasing.  Many brands strive to get a celebrity to endorse them by “retweeting” a tweet to reach the masses.  Today, the prevalence of QR codes is increasing and appearing more and more on items of clothing.  Is history about to repeat itself in the digital age?

Could your brand benefit from using a broader range of channels to reach your customers?  Could you promote your brand effectively using a key message on clothing?  Do your offline marketing activities compliment your online efforts?

We would love to discuss your marketing efforts with you to help you determine how you can optimise your marketing.  If we can help, please contact us here.

We use cookies on our website to give you the most relevant experience by remembering your preferences and repeat visits. By clicking “Accept All”, you consent to the use of ALL the cookies. However, you may visit "Cookie Settings" to provide a controlled consent.
Cookie SettingsAccept All
Manage consent

This website uses cookies to improve your experience while you navigate through the website. Out of these, the cookies that are categorized as necessary are stored on your browser as they are essential for the working of basic functionalities of the website. We also use third-party cookies that help us analyze and understand how you use this website. These cookies will be stored in your browser only with your consent. You also have the option to opt-out of these cookies. But opting out of some of these cookies may affect your browsing experience.
Necessary Always Enabled
Necessary cookies are absolutely essential for the website to function properly. These cookies ensure basic functionalities and security features of the website, anonymously.
Functional
Functional cookies help to perform certain functionalities like sharing the content of the website on social media platforms, collect feedbacks, and other third-party features.
Performance
Performance cookies are used to understand and analyze the key performance indexes of the website which helps in delivering a better user experience for the visitors.
Analytics
Analytical cookies are used to understand how visitors interact with the website. These cookies help provide information on metrics the number of visitors, bounce rate, traffic source, etc.
Advertisement
Advertisement cookies are used to provide visitors with relevant ads and marketing campaigns. These cookies track visitors across websites and collect information to provide customized ads.
Others
Other uncategorized cookies are those that are being analyzed and have not been classified into a category as yet.
SAVE & ACCEPT